Alphabet Inc.’s Google and Mastercard Inc. brokered a business partnership during about four years of negotiations, according to four people with knowledge of the deal, three of whom worked on it directly. The alliance gave Google an unprecedented asset for measuring retail spending, part of the search giant’s strategy to fortify its primary business against onslaughts from Amazon.com Inc. and others.

Through this test program, Google can anonymously match these existing user profiles to purchases made in physical stores. The result is powerful: Google knows that people clicked on ads and can now tell advertisers that this activity led to actual store sales.

Google is testing the data service with a “small group” of advertisers in the U.S., according to a spokeswoman. With it, marketers see aggregate sales figures and estimates of how many they can attribute to Google ads — but they don’t see a shoppers’ personal information, how much they spend or what exactly they buy. The tests are only available for retailers, not the companies that make the items sold inside stores, the spokeswoman said. The service only applies to its search and shopping ads, she said.

This appears to be part of the data set that the Washington Post previously reported was being used to attribute purchases to ads.

Initially, Google devised its own solution, a mobile payments service first called Google Wallet. Part of the original goal was to tie clicks on ads to purchases in physical stores, according to someone who worked on the product. But adoption never took off, so Google began looking for allies. A spokeswoman said its payments service was never used for ads measurement.

Since 2014, Google has flagged for advertisers when someone who clicked an ad visits a physical store, using the Location History feature in Google Maps. Still, the advertiser didn’t know if the shopper made a purchase. So Google added more. A tool, introduced the following year, let advertisers upload email addresses of customers they’ve collected into Google’s ad-buying system, which then encrypted them. Additionally, Google layered on inputs from third-party data brokers, such as Experian Plc and Acxiom Corp., which draw in demographic and financial information for marketers.

This entire program — but particularly these two paragraphs — indicates so much about how all of these companies view the consumer landscape. The solution to not-quite-precise-enough numbers has been to collect more data, and the response to privacy concerns is to fuzz that data a little bit when it’s shared between companies. Based on the actions the surveillance capitalism industry has taken, they have not chosen the correct response of collecting less data.

It is worth noting that privacy was one of Apple’s goals for the design of Apple Pay. According to this Bloomberg report, the complete opposite was true of Google Wallet. As much as we view decisions by any companies as financially-motivated, we should remember to also think of Google’s moves — and those of credit card companies, data brokers, and so forth — as inherently creepy, invasive, and also likely not in the best interests of consumers.

jhamill
reply
Capitalism is "not in the best interests of consumers".
California 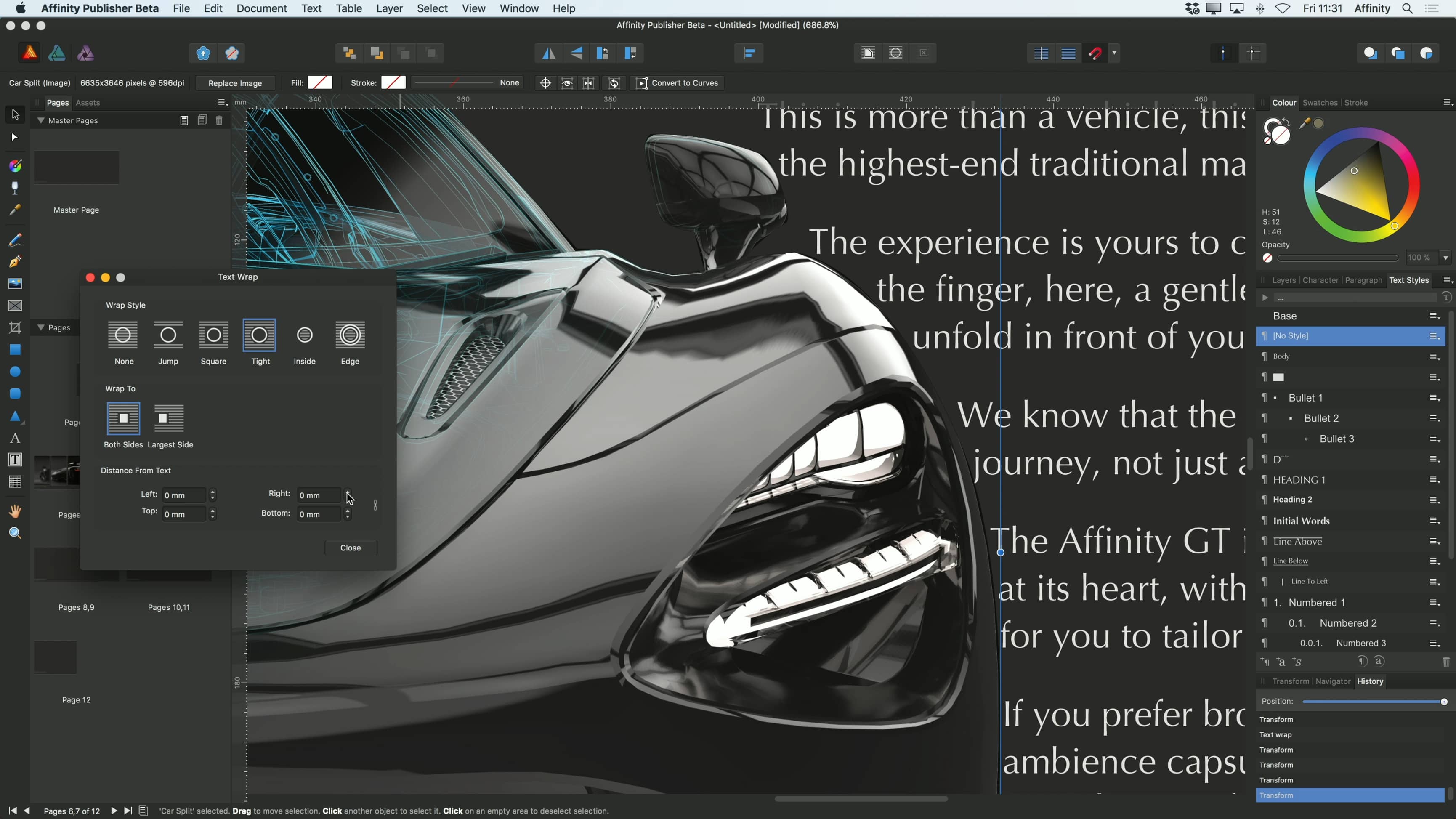 Serif, the maker of Affinity Photo and Designer, announced the launch of a public beta for Affinity Publisher, a desktop publishing app that it is developing for the Mac and Windows. In a press release today, Serif says that the feature set will include:

Of course, Serif cautions that it is not ready to use in production work, but you can download the app from Affinity’s website and take it for a spin to get a sense for what is coming and provide input to Serif. The final product is expected to ship in ‘a few months’ according to the Publisher preview webpage.

In addition to the signup page, Serif has published a series of 16 short video tutorials explaining the basic functionality of the app. There is also a sample brochure you can download to use as a playground for experimenting with the app’s features. 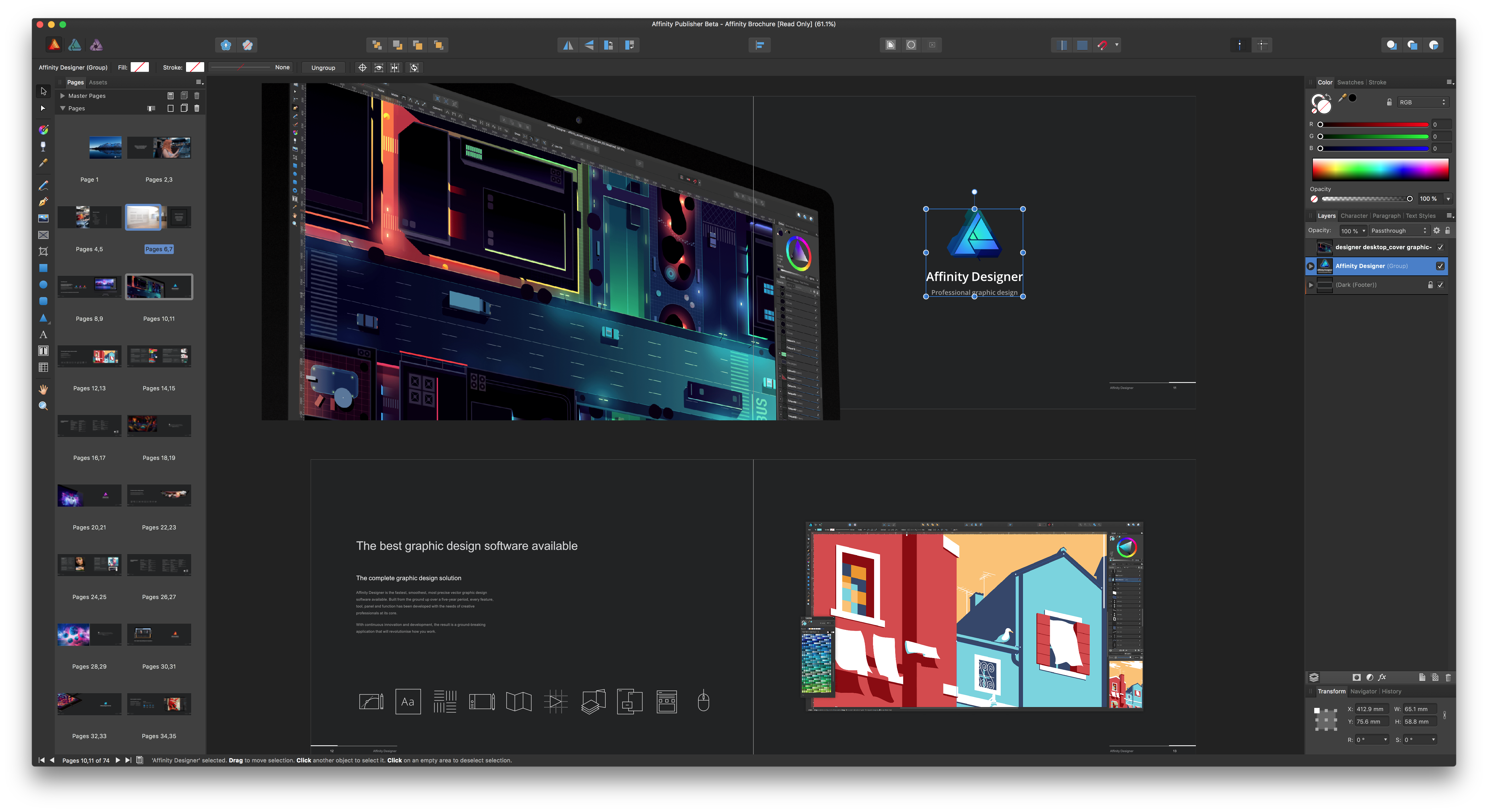 From my initial look at the beta and tutorials, Publisher is an ambitious effort to build an integrated suite of creative apps by leveraging Affinity Photo and Designer, which will be accessible directly from within Publisher. Those integrations are not yet available in the beta but will be activated in a later build.

It’s been interesting to watch Serif invade an app category, in which Adobe has been the dominant player for so long, with sophisticated but cost-effective alternatives that suit the needs of many users. Publisher looks like an app that could round out the Affinity suite of apps nicely, making the trio of apps appealing to an even greater audience.

Club MacStories offers exclusive access to extra MacStories content, delivered every week; it's also a way to support us directly.

Club MacStories will help you discover the best apps for your devices and get the most out of your iPhone, iPad, and Mac. Plus, it's made in Italy.

My liberation from Adobe is approaching.
Brussels, Belgium

For many years now, iOS has offered an option in the Passcode section of the Settings all: “Erase all data on this iPhone after 10 failed passcode attempts.”

I’ve long been intrigued by this setting, but never turned it on, out of the vague fear that something could happen and I’d wind up with a wiped iPhone. Say, if a “friend” surreptitiously took my phone at a bar and entered 10 wrong passcodes as a prank. Something like that.

I asked on Twitter over the weekend how many people use this feature, and over 4,000 people responded to the poll. One-third use the feature, two-thirds don’t. Among those who don’t, the most common response, by far, is that they don’t use it because they’re the parents of young children, and they fear that their kids will trigger the erasure of their phone.

I had no idea until I looked into it last weekend, but it turns out this feature is far more clever than I realized, and it’s highly unlikely that your kids or jackass drinking buddies could ever trigger it. After the 5th failed attempt, iOS requires a 1-minute timeout before you can try again. During this timeout the only thing you can do is place an emergency call to 911. After the 6th attempt, you get a 5-minute timeout. After the 7th, 15 minutes. These timeouts escalate such that it would take over 3 hours to enter 10 incorrect passcodes.

It seems pretty clear from the responses to my poll that I wasn’t alone in thinking that this feature was more dangerous than it really is. I’ve got it turned on now, and I can’t think of a good reason why anyone wouldn’t enable this.

1 Comment
Here’s what happens when you try to rummage through the garbage of the man who owns the world’s secrets.
Read the whole story

onepointzero
reply
“His house, which he purchased in 2011 for $7 million, is about a ten minute drive from the Facebook campus. It’s a quiet neighborhood, seemingly populated only by older women who walk inbred, wall-eyed dogs around in circles all day.”

YouTube Didn’t Tell Wikipedia About Its Plans for Wikipedia by John Gruber
Sunday March 18th, 2018 at 5:13 AM

At SXSW yesterday, YouTube CEO Susan Wojcicki announced that the platform would start adding information from Wikipedia to conspiracy-related videos within the next few weeks. “We will show a companion unit of information from Wikipedia showing that here is information about the event,” she said. The company is “using a list of well-known internet conspiracies from Wikipedia” to pull from. However, YouTube appears to have left one party in the dark: “We were not given advance notice of this announcement,” said the Wikimedia Foundation in a statement on Twitter.

According to Wikimedia, this partnership isn’t a formal one with either Wikimedia or Wikipedia. “We are always happy to see people, companies, and organizations recognize Wikipedia’s value as a repository of free knowledge,” the company said. YouTube doesn’t need to officially partner with Wikimedia to use information from Wikipedia, but it’s still a bemusing tactic to make such an announcement without any official word passed between the two.

The answer, of course, is money. YouTube’s executives know these videos are harmful but they want the money from the ads they show against them.

I’ve been getting these text-spam messages since last summer, when I set up a new Facebook account and turned on two-factor authentication. I created the new profile with somewhat vague intentions of using it for professional purposes — I didn’t like the idea of messaging sources from my primary Facebook account, where they could flip through pictures of my high school prom or my young nephews. But I didn’t end up using the profile often, and I let it sit mostly abandoned for months at a time.

At first, I only got one or two texts from Facebook per month. But as my profile stagnated, I got more and more messages. In January, Facebook texted me six times — mostly with updates about what my ex was posting. This month, I’ve already gotten four texts from Facebook. One is about a post from a former intern; I don’t recognize the name of one of the other “friends” Facebook messaged me about.

This is nuts — how scummy does Facebook have to be to punish people who do the right thing by setting up two-factor security?

onepointzero
reply
This happened to me a while back. I have a Facebook account I use for testing apps every so often and setup 2FA on it. I started getting texts asking me to post updates but they came from an unknown number so it took me a while to even figure out who was responsible. Extremely annoying.
Brussels, Belgium